On Tuesday night, the Burlington School Board got its first look at five concept plans for a new high school and tech center — a massive and expensive project the district hopes to complete by summer 2025.

Two of the options would involve building on the existing school footprint, while the other three would relocate the building, at least partially. The designs were created with input from a wide range of students, staff and community, Superintendent Tom Flanagan said at the meeting.

The new building would be a permanent, state-of-the-art home for Burlington high school students, who were relocated in the fall of 2020 when authorities found high levels of polychlorinated biphenyls on campus. For more than a year, the students used a temporary high school in a former downtown Macy’s department store.

The new school could cost between $181.3 million and $196.9 million. This price does not include the work required to demolish existing buildings and remove PCB-contaminated building materials and soil, which is expected to cost close to $30 million.

The five options share a number of elements. All are around 300,000 square feet; include space for the same assortment of educational programs; and have a large gym, cafeteria and auditorium. They will all include a multi-level student gathering place or common area, outdoor courtyards, washrooms for all genders, and parking spaces for more than 240 bicycles and 375 cars. In all designs, the playing fields remain unchanged.

Differences include cost, when the existing buildings would be demolished, the positioning of the technology center relative to the high school, and the shape of the building.

Architect Carl Franceschi of Massachusetts-based DRA Architects, one of the firms contracted to design the new school, presented the board with each option. The design team was initially tasked with designing a building on land to the east of the existing high school, Franceschi explained, but due to the limitations of that site – including its size, soil conditions and topography – the architects also proposed two options for the site of the existing secondary school.

Notable features of each design include:

A three-story building with lower levels where the ground is sloping allows the use of the existing Building A – which houses the sports hall, auditorium and kitchen – during construction. The Burlington Technical Center would be located on the north side of the building. Includes covered parking and limited space for future expansion. 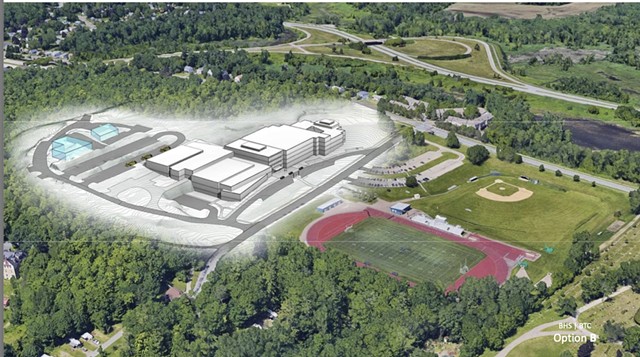 Option B: $182.3 million
Compact three- and four-story building, built on the existing location of the high school, technology center located behind the high school on the north side. Plenty of room for future expansion. 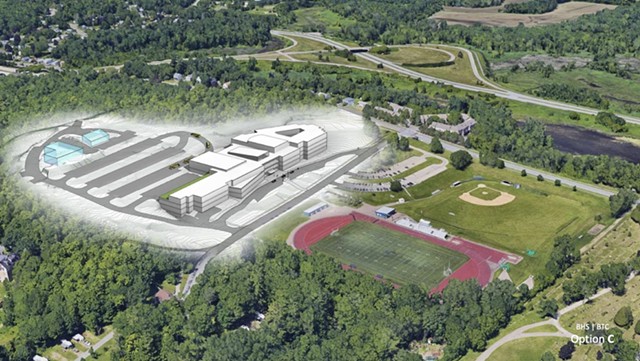 Variant D: $196.9 million
The “off the beaten path” option: Institute Road would be replaced with a new roadway, the building would face North Avenue, an L-shaped footprint with a curved facade, a technical center and a high school located in separate wings. Would need city support to coordinate new road construction. Construction would likely take 36 months compared to 30 for the other options.

Following the presentation, Board members had the opportunity to ask questions.

Commissioner Polly Vanderputten asked for clarification on the quality of soil on campus. Because much of it is sandy, said property department manager Marty Spaulding, fill would be added to make it stable enough to support a large structure.

Commissioner Jeff Wick wondered if the completed high school would compare to “some of those nicer, more durable buildings at Champlain College.”

Freeman French Freeman chairman Jesse Beck, whose company is also working on the project, said the building would be built to “last that lifespan of 50 years or more”.

Beck said the school would be built “with strong masonry-like materials” such as brick and stone, with “a lot of glass that brings in natural light.”

“This building has to be a ‘Wow.’ It has to be beautiful,” added Beck. “We’re spending a lot of taxpayers’ money, and that has to be something everyone is proud of.”

The district will collect community feedback on the five options at a public forum on April 12 and through a survey. Once the district decides on its preferred conceptual design – likely later this month – the architects will create a more detailed schematic design. If all goes according to plan, voters would consider a bond to support the project in November and construction would begin in the summer of 2023.