Some time ago, a supplier came to the restaurant with a “new” product to taste. It was called Garum and although it came in a very stylish way with modern stylish packaging in a long transparent bottle and a funky new label, I knew there was absolutely nothing new about garum. I remember reading somewhere in an old cookbook that it was almost like last day ketchup for the gods of imperial Rome and garum is actually mentioned in Roman literature as early as the 3rd and 4th centuries BC!

It was basically a fish sauce, not in the sense of something you put on fish, but more something made from fermenting fish and used as a condiment. In a way very similar to Asian fish sauce, the Roman version was made by layering fish and salt until it fermented, then used to flavor almost anything at the time. The decline of the Roman Empire led to the decline of garum, but it continues to be made in a few places in the Mediterranean, mainly around Naples, where it is called colatura and it is now making a bit of a comeback. It is the umami of the sea and it is all that the sea contains: the salt, the iodine, the oxide and the salting of the fish over time.

Umami is the enigmatic fifth taste, a rich, meaty flavor and catalyst that unlocks and defines the deliciousness of certain savory foods. Around 3,000 years ago, Greek philosophers came up with the concept of our four basic tastes: sweet, salty, sour and bitter. Their theory remained intact until the beginning of the 20th century, when a scientist in Japan discovered a fifth taste: umami. But unlike the traditional four tastes, umami, it seems, is a bit more complicated. In Japan, people have been using dashi, an umami-rich broth made from kombu (seaweed), for years to get the best taste from food.

The concept of umami has been recognized in the East for a long time, but it is only in the last decade that umami has begun to play an increasingly important role in the West. Today, obsessive chefs believe that if you manage to find the perfect balance between the five basic tastes: sweet, salty, bitter, sour and umami, you will have a kind of culinary utopia!

Luckily for those who don’t want to drench all their food in soy sauce, fish sauce and glutamate, there is naturally some. umami-rich foods like sardines, mackerel, oysters, mushrooms, truffles, soybeans, potatoes, and tomatoes.

Tomatoes actually take on an intense umami flavor when dried and there are a number of reasons why the flavor of tomatoes changes during the cooking and drying processes. The first is that the tomatoes are sprinkled with fairly high levels of salt to help remove moisture. During the drying or cooking process, all aroma molecules become more concentrated. The resulting flavor is more intense and without becoming too technical, the glutamic acid breaks down during the drying process – due to the evaporation of water and the introduction of salt – and is transformed into different aromatic molecules .

This is why a basic tomato sauce or ketchup contains a lot of umami, but when you dry tomatoes they have a lot more and they can also flavor many dishes. It’s the perfect time to try your own sun-dried tomatoes and unlock all that hidden umami!

1. Preheat the oven to the lowest heat setting.

2. Cut the tomatoes in half horizontally and remove most of the seeds. Salt the inside and turn cut side down on a cooling rack – let for half an hour, then rinse and dry.

3. Mix crushed garlic with oregano and black pepper. Spread this mixture on the cut side of the tomatoes. Place the tomatoes cut side up in a roasting pan and pour olive oil into the dish.

4. Bake for 4-6 hours or leave in the sun for up to two days, bringing them indoors at night.

5. Place the tomatoes in a sterilized oven jar and cover with extra virgin oil. Use in all recipes that call for sun-dried tomatoes. Store in a cool, dark place location, the tomatoes should keep for 6 months. Refrigerate upon opening and reserve 1 month covered with olive oil. 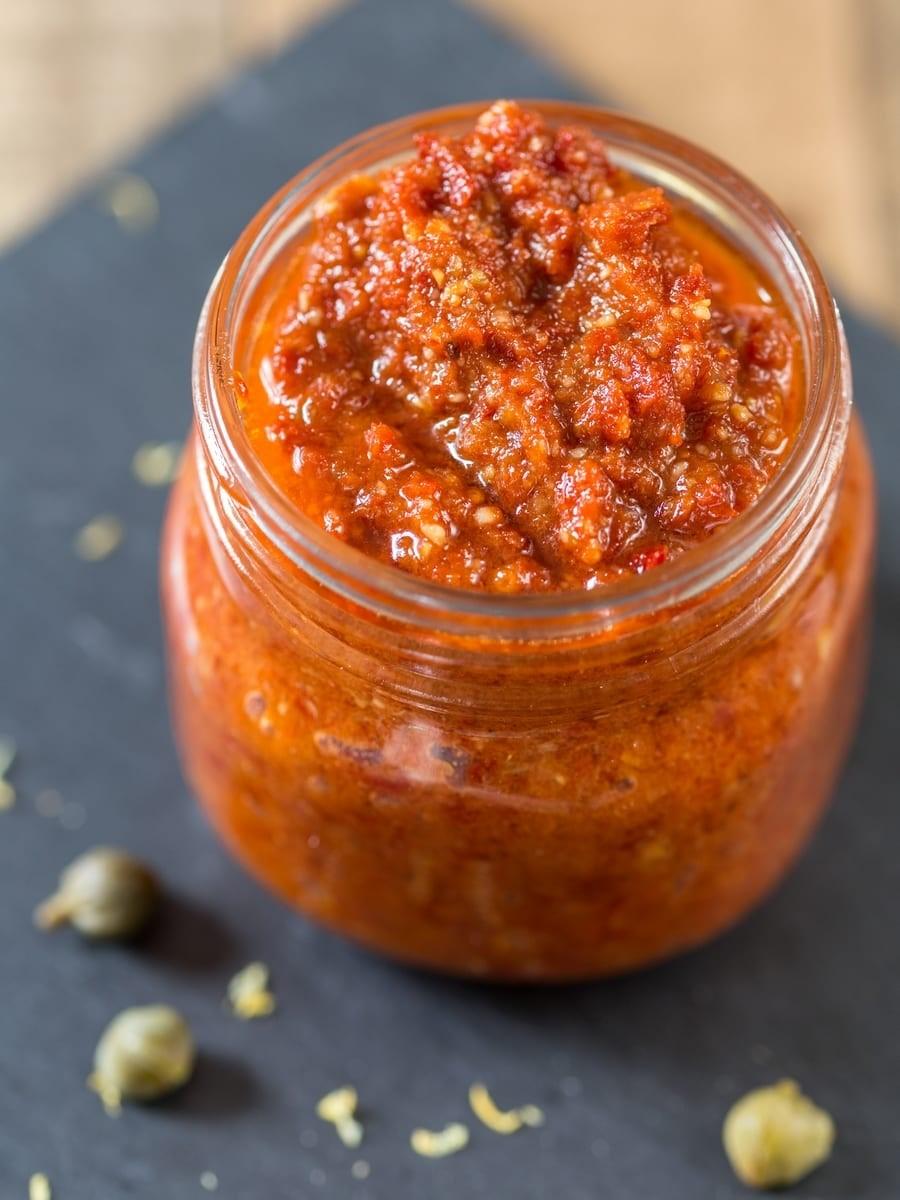 *Pesto rosso is a variation of the traditional green pesto. The addition of sun-dried tomatoes gives it a distinctive, milder flavor. Try it with pasta, spread over bruschetta or brush it over chicken before roasting.

1. Place all ingredients except oil in a food container processor; mix and gradually add the oil with the processor running high speed.

2. Store the pesto in a tightly closed jar in the refrigerator. 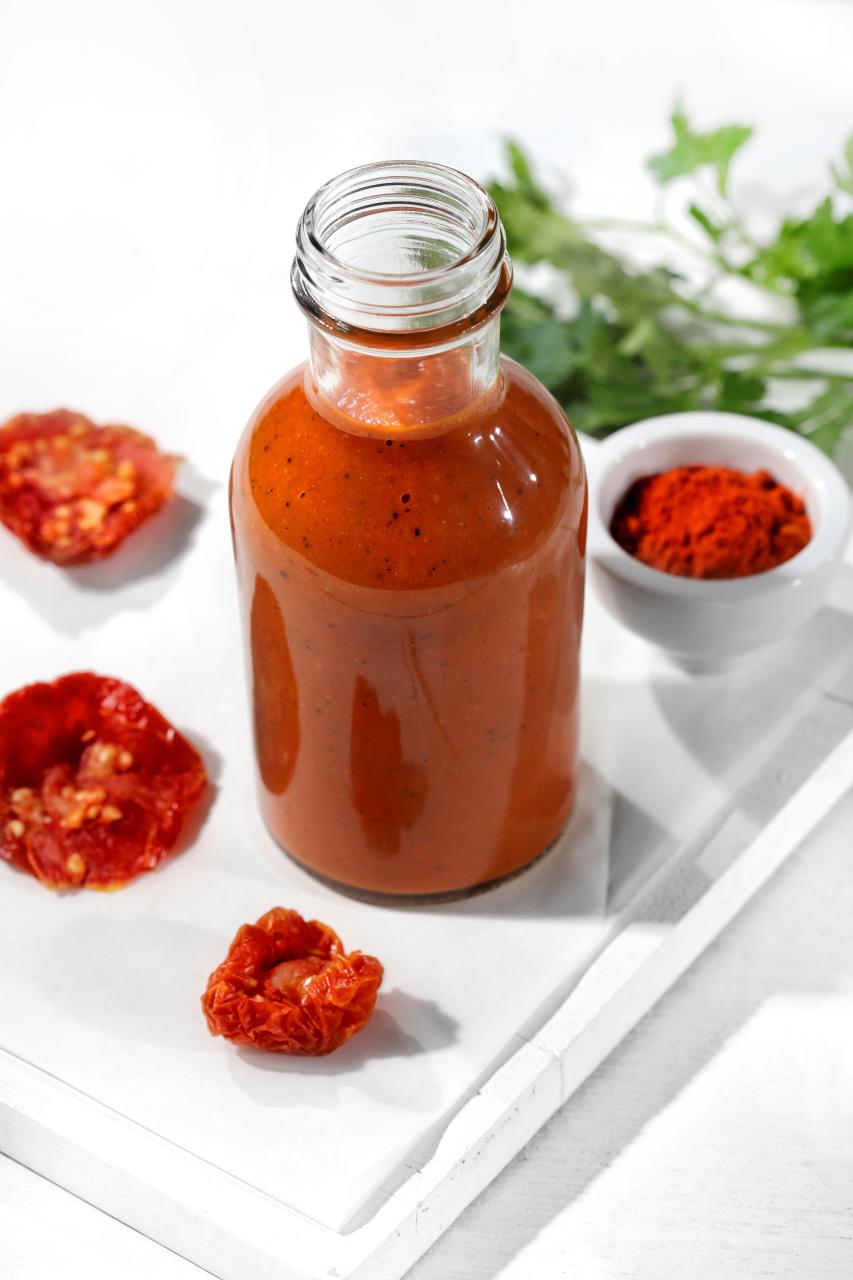 1. Heat the olive oil in a large heavy bottomed pan and add the onion, garlic, ginger and chilli. Cook gently over low heat for 5 to 6 minutes until softened, stirring occasionally.

3. Blend ketchup in a food processor until smooth. (Add a little water if necessary). Season with salt and pepper.